You asked for it: the 2X now shows up to 4 front (or rear) targets in 4 windows. 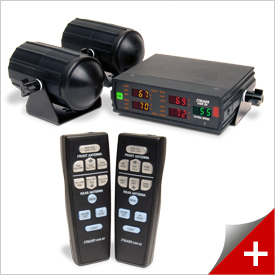 [Mouse over the thumbnails to see a larger image]
All 4 Target Zones Stationary; Any 2 Target Zones Moving
The Most Sophisticated
Ka-Band Antennas

Patented, RFI Immune Digital Antennas
The Stalker 2X achieves the industry?s longest range by digitizing the Doppler audio signal at the antenna and using a high-speed digital communication link to transmit data between the antenna and the counting unit.

Traditional two-piece radar units send a low-level Doppler audio signal from the antenna to the counting unit for processing and speed display. This method is susceptible to noise induced by the auto ignition and 2-way radio transmissions, which results in reduced range and increased potential for false targets. 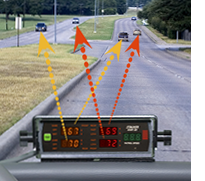 Conventional moving radar can only monitor traffic in one Target Zone. With the Stalker 2X, two moving Target Zones or all four stationary Target Zones can be monitored simultaneously. Stalker 2X is actually two independent radar units operating on a single 5-window display.

The Dual Zone capability of the Stalker 2X distinguishes it from competitors moving radars: only the 2X can monitor two zones from a single antenna. With the 2X, an operator can simultaneously monitor front same and front opposite or rear opposite and rear same Target Zones. No other police speed enforcement radar on the market has this feature.

True Doppler Audio
The audio Doppler tone in opposite-direction operation is generated from the target’s actual speed (not closure speed) so the tone always correlates directly to the target’s speed – regardless of patrol speed.

Vehicle Speed Sensing (VSS) Operation Is Standard
Connecting the radar to power and VSS has never been simpler. Plug the Stalker CAN/VSS cable into the car’s OBD II diagnostic port located under the dash on the driver’s side, and you’re done. No cables to splice, wire harnesses to find, just simple plug-n-play.

Rear Traffic Alert
Rear Traffic Alert, a proprietary feature of the 2X, is designed to warn the patrol officer of rapidly overtaking same-direction traffic when the patrol vehicle is most vulnerable to rear-end collisions – pulling into traffic from a standing start. If the 2X senses a rapidly approaching vehicle within adjustable speed parameters, it warns the officer with a distinctive alert tone. Rear Traffic Alert is a patent pending Stalker technology.

“Faster” Target Locking Is Another STALKER First
Now, an operator has a choice of locking the faster target or stronger target in any Target Zone, including same-direction faster targets.

A Giant Leap in the Effectiveness of Stationary Operation
Optional Waterproof Components
The Stalker?s 2X waterproof components are durable, accurate products for continuous duty in the worst conditions. A full selection of brackets, mounts and cables are available. 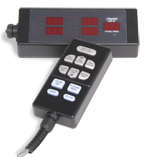 The direction sensing ability of the Stalker 2X allows the operator to select a specific direction of traffic to monitor. The 2X can measure closing targets while automatically ignoring vehicles that are going away–even if the target moving away is closer than a distant closing target. Imagine the typical situation where you wish to measure closing vehicles at a lengthy distance on a two-lane road. Just when a distant car enters the picture, a truck passes by your location heading away from you (and towards the approaching car) A conventional radar would display the truck’s speed until it is out of the area–and you could not measure the closing car’s speed. The 2X is able to completely ignore the truck because it is traveling away from the radar, thereby being able to clock the closing vehicle–even though it is still distant. The Stalker 2X makes stationary operation very useful and highly effective in all locations.

Provides Voice Verification of the Antenna, Radar Mode, and Direction
Whenever a target is locked, the Stalker 2X audibly tells the operator WHICH antenna is in use (front or rear), what MODE the radar is operating in (moving or stationary), and the DIRECTION (opposite or same direction) the vehicle is traveling. This added step assists the operator in ensuring accuracy every time.

Quick Search for Cables or Mounts

MOUNTS: Determine the correct brackets and mounts for both motorcycle and vehicle.

The Stalker 2X uses automation to reduce officer distraction caused by remote control use. Set-and-Forget Operation: Just select the two Target Zones you want to monitor and put the remote down. You simultaneously monitor four targets (strongest and faster in each zone) without touching the remote.

Other remote control features include tactile feedback keys, an ergonomically contoured body, amber backlit keys for night use, and omni-directional infrared operation that eliminates the need to point the remote.

Fast-Lock Remote
This remote is designed for departments that require Fast Lock operation and normally operate in constant transmit mode.

Instant-On Remote
This remote is designed for departments that do not require Fast Lock operation but routinely use the “instant-on” feature. A dedicated XMIT/HOLD key provides instant transmitter ON/OFF operation. 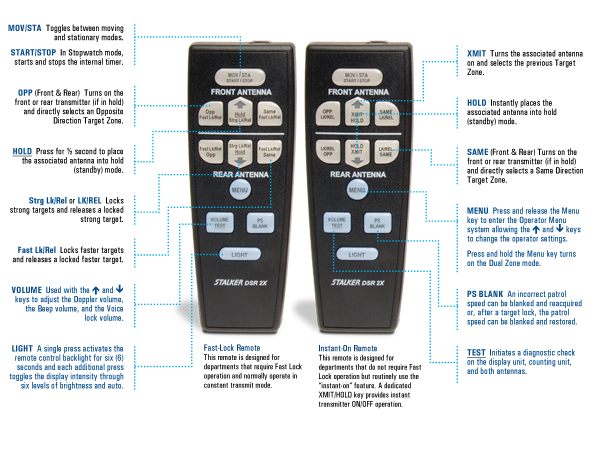 Installation from Applied Concepts on Vimeo.

May 18, 2011 - Stalker Radar's new Dual Zone mode allows the officer to simultaneously monitor the speeds of ALL targets in the direction he is looking (either front or rear).

PLANO, Texas, May 18, 2011 ? The addition of Dual Zone mode (simultaneous opposite zone and same lane zone), on a single antenna, presents the officer with a clearer picture of traffic speeds leading to better speed enforcement. The new Dual Zone feature is available exclusively on Stalker?s top of the line Stalker 2X traffic radar.

The 2X Dual Zone's capability distinguishes it from competitors' moving radars: the 2X can monitor two zones from a single antenna. With the 2X, an operator can simultaneously monitor front same and front opposite or rear opposite and rear same Target Zones. No other police speed enforcement radar on the market has this patent-pending feature.

Sound complicated? It really isn't. Once you drive it you'll see how intuitive the controls are and how the 2X's automatic functions allow the operator to drive the patrol vehicle, rather than manipulate the radar.

Think of the Stalker 2X as two independent radar units operating through a single, 5-window display. Conventional moving radars can only monitor two vehicles in one Target Zone. The Stalker 2X can monitor four vehicles in one or two Target Zones. The 2X's 5-window display contains two strongest target windows, two faster target windows, and a single patrol speed window. One Target Zone is displayed in each set of strongest/faster windows. Any combination of one front and one rear Target Zones can be monitored, for example front opposite direction and rear same direction.

In Dual Zone mode, one antenna can simultaneously monitor targets in both target zones in its radar beam. All other radar monitor only one target zone at a time.

When in stationary mode, all four Target Zones can be simultaneously monitored. Dual Zone Mode is also available while stationary, the chief advantage being that each of the two Target Zones uses a separate set of strongest/faster windows.

The Stalker 2X's ergonomic remote control allows the operator full control of the radar without having to manipulate display panel controls. Its true Doppler tone reflects the target speed rather than patrol vehicle's speed. Operators learn to judge target speed from the Doppler tone without diverting attention from the roadway ahead. And when a target is locked, the 2X voice enunciator confirms: 1) the target's position relative to the patrol vehicle, 2) whether the radar is in stationary or moving mode, and 3) the target's direction relative to the patrol vehicle. For example, "Front, stationary, closing."

Stalker Radar is the World Leader in Speed Measurement. Law enforcement organizations, professional sports teams, and manufacturers around the globe requiring state of the art speed measurement applications look to Stalker Radar products for the utmost in quality and value.